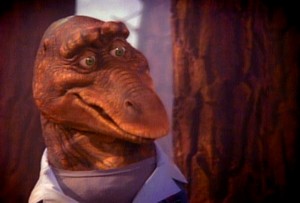 Roy Hess is one of the playable characters from the Dinosaurs (Franchise) He is included in the Dinosaurs Team Pack with Baby Sinclair.

Roy Hess is a single Tyrannosaurus male who works at WeeSaySo Corporation in R. H. Biggfield's division with Earl Sinclair. He has a serious crush on DeVertebre, and Once dated Earl's sister, Pearl Sinclair.

Roy Danger Hess of the WeeSaySo Corporation, at your service (Roy when entering the game)

Shift's over! See you tomorrow! (Roy when leaving the game)

Earl, when did you get Hair? (Roy Hess to Hulk)

Yo Luke, you should meet Earl! He's a big Tar Wars fan! (Roy to Luke Skywalker)

Retrieved from "https://lego-dimensions-fanon.fandom.com/wiki/Roy_Hess?oldid=12423"
Community content is available under CC-BY-SA unless otherwise noted.